My husband rarely ever "suggests" recipes for the Test Kitchen... but last week he sent me the link to a Pork Tenderloin Recipe from "In The Kitchen With Ken". You can get the full recipe here: Sweet & Spicy Pork Tenderloin
I stocked up on B1G1 Pork Tenderloin at Harris Teeter last week so it was PERFECT timing on my hubby's part to request a meal that I only needed to head to the store to get ONE ingredient for (Apples!).
I was not too sure about the mix of spices I was dumping in my bowl: cumin, ginger, thyme, cayenne pepper, red pepper flakes, onion powder, paprika AND cocoa powder.... but since the hubs requested it, I followed the recipe to a "T" instead of "doctoring it up" like I typically like to do. It is rare I make a recipe that lacks balsamic vinegar and sugar but this was worth a try! 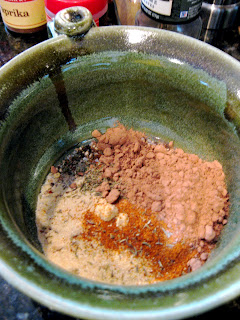 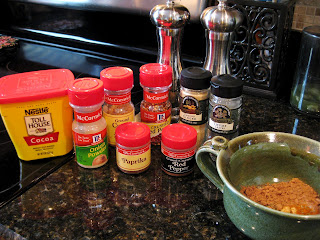 After I finished mixing up the spices for the "rub" I realized that at the bottom of the ingredient list it said 1 cup honey.... HMmmm Honey? What am I supposed to do with that? The recipe said that it was a "rub" for pork which typically would have been a dry rub with the spices... and the only other instructions were to cut up (5) apples into wedges to place around the pork in the 9 x 13 pan... So the only place the honey made sense to me was to add it to the spices and make it a goo-ey rub!
The "goo-ey" rub didn't want to go on the tenderloin very easy so I did the best I could coating the apples & pork with the spice/honey mixture. 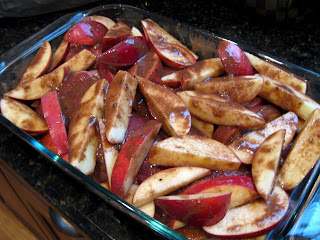 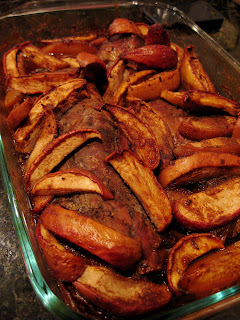 Result: This was a SUPER EASY & Quick Recipe to assemble and the end result was DELICIOUS! The Pork was so tender and although I was a bit skeptical about the spices in the rub, the taste was phenomenal! This recipe will definitely be a keeper!
I think next time I make this recipe I will adapt it to my "freezer cooking" since it made (2) whole tenderloins- it is enough for (3) meals for my husband and I! We are having it for dinner again tonight because there is a whole tenderloin left!
To do this I will: Split the recipe between (2) food-saver bags; One "rubbed" tenderloin in each and split the (5) sliced gala apples between the (2) bags. I will then vacuum pack them to seal them up and pop them in the freezer to eat later! When I am ready to make them, I will take out of the freezer about 36 hours in advance to allow plenty of thaw-time and then pour into a pan and bake as normal.
I served mine with Lima Beans (yuck! anyone have a recipe for these they are willing to share??) and Twice Baked Potatoes. 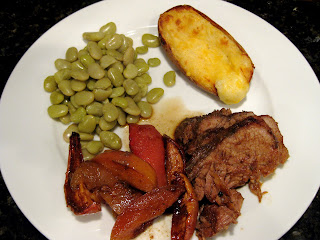 Thanks Ken for the amazing recipe!
Posted by Melissa at 4:29 PM